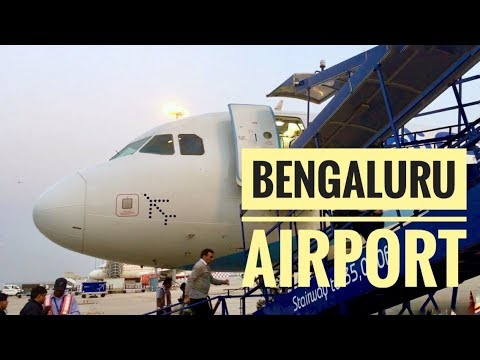 If you are visiting Bangalore then you are most likely to land at Bengaluru International Airport renamed in 2013 in the memory of city founder as Kempegowda International Airport (IATA airport code: BLR) which is located near Devanahalli village about 40 kilometers away from the main city. The airport has single runway and two terminals (apart from cargo terminal).

With in India, Bangalore (or Bengaluru) has direct flights to all major cities like Mumbai, Delhi, Chennai and Kolkata and tourist destinations such as Goa, Jaipur and Varanasi.  In our experience IndiGo, Jet Airways and SpiceJet offer most frequent domestic connections.

International passengers arrive at terminal 1 and must go through immigration checks through any of 18 counters, go to luggage belt to collect bags and clear customs which usually involves putting your luggage through x-ray scanner.  The entire process from leaving aircraft to getting out of terminal building will take 30 minutes or more.

Indian government allows e-visa valid for 30 days to bonafide tourists from 150 countries for a fee of US$60.  There are currency exchange kiosks operated by Centrum, a private money changer which offers terrible exchange rates so use them only in emergencies.

The duty free allowance in India is 2 liters of alcohol, a box of cigarettes, electronics worth Rs 25000 (USD 400).  Passengers are allowed to bring personal electronics such as camera, one laptop, mobile phone, iPad or similar items without filling additional paperworks or paying tax.

There are transfer desk of airlines before immigration counters for those making an international connection.  There is also a 24/7 information desk at the arrival hall.  Passenger can also access transit lounges on pay per use basis or complementary access for those holding lounge pass.

Domestic passengers simply pickup luggage at designated belt and can be out in few minutes.

How to Go to City?

The quickest and most convenient way to reach city will be to hire a cab from app based service offered by Ola and Uber and takes little over one hour.  Both have a designated arrival point located behind cafe coffee day outside the terminal building.  There are metered taxi services offered by state owned taxi service as well as private operators.

If you plan to save money and have couple of hours then you can take airport shuttle service offered by Vayu Vajra which connects airport with 11 designated routes to the city.  For more information you can contact BMTC airport kiosk informationTelephone: 080 2760 7989 or Mobile:077 6099 1269 or visit www.mybmtc.com Please ensure that you have sufficient cash to pay for bus fare which is collected inside the bus.

Intercity bus service Flybus operates comfortable air-conditioned buses to nearby cities of Mysuru and Salem. Carsonrent and Myles offer self drive car rental from the airport.

How to Reach Airport from Bengaluru City

Bangalore city to airport can be reached by car (private, self drive and app based taxi service) and it takes between 1 hour to 2 hours depending on the traffic conditions.  Visitors are advised to account for at least 2 to 3 hours for airport transit time because city traffic can be very unpredictable.  There is no direct metro service to the airport.

Most of the airlines require that you complete your check in formalities 45 minutes before departure time for domestic flights and 90 minutes before international flights operating from terminal 1 at six international gates (16, 17, 18, 21-22, 23-24, 25-26).  There are business class and pay per use lounges operated by Plaza Premium and Above The Ground that are located after checkin and immigration.

Facilities at the Bangalore Airport

Duty free shops are located in both arrival and departure areas.  International passengers can also pre book at the website www.bengalurudutyfree.in and collect the merchandise from the airport duty fee stores and other retail stores selling travel essentials and souvenirs.

Although one needs to plan in advance and allocate at least two hours for airport transfer from Bengaluru city but once you are there it has all amenities to keep people entertained provide for comforts for those waiting at the airport.  Bengaluru airport is 3rd busiest airport in India after Delhi and Mumbai and 35th busiest airport in Asia.  In 2016 it handled over 22 million passengers and 175000 flights.