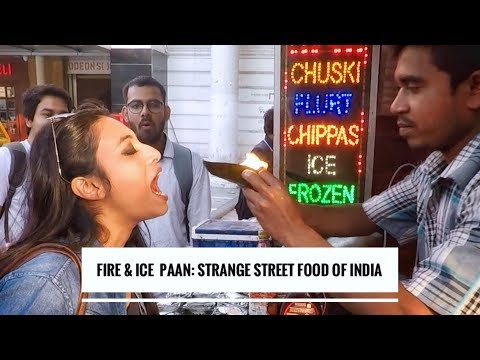 Although Paan is on Indian menu for over 2500 years, humble Paan has been experimented upon by modern Panwari’s of 21st century. Fire & Ice Paan is one such unusual variation which is popular wth young generation of Indians. I witness Fire & Ice Paan action in Connaught Place, New Delhi when a group of brave young men and women came for some fun.

Paan is edible food preparation which is made with betel leaves, areca nuts and few aromatic ingredients to act like a palate cleanser after spicy Indian meal. Sometimes chewing tobacco is added to act as a stimulant.

Most Indians eat two types of Paan or Pan.  The first one is simple less flavored known as Saada Paan while the other one with more elaborate list sweet aromatic of ingredients known as Meetha (Sweet) Paan.  Both are taken at the end of the meal although some people eat it at any time of the day.

Every state of India has its own variation and method of preparing it however Paan from Varanasi known as Banarasi Paan has become more famous specially after it has been popularized by Bollywood via various songs and dance with reference to Banarasi Paan.

Sometimes in second decade of 21st century several Panwaris (people who make Paan) started experimenting with usual recipe.  Most claim that it took about few weeks to perfect it and make it safe for people to eat.  It is like a tiny fireball (remember B-52) and clove is added to give cooling effect in the end.  The recipe can be found on YouTube.

How To Enjoy Uzbek Bread Lepyoshka