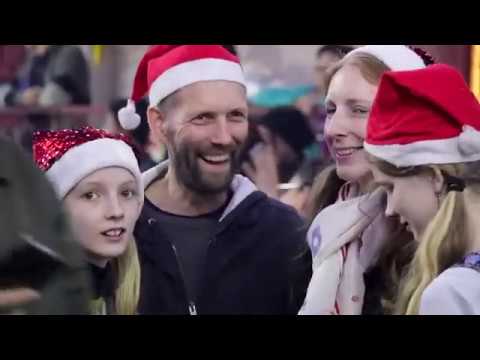 Bow Barrack, a traditional Anglo-Indian quarters of Kolkata, celebrates Christmas in special way.  It is nothing compared to Park Street, a favorite destination for merry makers in Kolkata.  The Christmas or Bow Fest is a week long celebration starting from day before Christmas and ending in wee hours of the new year.

How To Reach Bow Barracks?

Bow barracks, consisting of seven quirky residential blocks, is located in the central Kolkata. Hence, it is well connected with public transport. Both metro stations, Chandni Chowk and Central are within the walking distance. One can reach via a narrow street between Hare street and Bahu Bazaar police station. Google map has excellent directions.

As the name suggests, Bow Barrack was built as garrison mess during First World War.  Government handed over those apartments to working class Anglo-Indian communities on highly subsidized rent, after the war.  People from non christian faith also started living after independence. However, Anglo-indians of Christians faith still occupies more than 80% these heritage residential blocks.

A trip to Bow Barracks is a trip down the memory lane. Halsey Ricardo, the architect who designed iconic Howrah bridge, was also architect of this project. Design is minimalist for these seven blocks of red brick buildings with Green doors and windows that highlights its rustic, utilitarian nature.

Currently there are over 130 families living in these barracks turning into residential apartments.  Bow barrack’s residents celebrate Christmas in a communal way. Over the course of time, those celebrations got bigger culminating into a week long event.

This has caught attentions of several famous bloggers and travel writers.  Traditionally, during Christmas, lots of residents and visitors of Kolkata flock to this small, quirky close knit community to be part of Bow-fest celebrations.

Usually on 23rd December, there is a musical event when local talents from community come and sing popular songs and Christmas carols. You can expect any kind of music from popular Latina numbers to Elvis impersonators to Rock from local artists who probably have a day job as performing artists. It is not uncommon to see local celebrities to come over and perform. The community sales anglo-indian food along with home made wine.

Kids are in focus for the Christmas party held later afternoon on the eve of Christmas. There are games, food stall and Santa arriving in hand pulled rickshaw – a quintessential leaf from Kolkata’s past. Community also distributes gifts to underprivileged children.

On other day there are events for elderly involving community dinner and Bingo. The dates of the event are not fixed every year so it is better to check with locals preferably a resident of Bow barracks.

The year end dance party starts at 10 pm on new year’s eve and continues until wee hours of the morning.

All Christmas events of Bow barracks in Kolkata are free and everyone is invited. There are donation box at the entrance but contribution is voluntary.

Few days before Christmas (23nd December on 2019) residents organize a musical events. It is largely a community effort where residents and other members of anglo-indian community showcase their talents.

The entry is free and there is a donation box placed near the entrance right next to Grotto which is beautifully decorated for the Christmas. There is a stage made for performance at one end and food stalls selling delicious anglo-indian food is set the other end. For those who like to sit and watch, enough seats are provided.

Show starts around 8 pm when children from the blocks showcase their singing and dancing talents. People start coming in gradually and by 10 pm, the place is full. The atmosphere is very informal as most people know each other for decades. However, outsiders and visitors are welcome. Over the course of the evening, people specially who sing in local clubs start performing one by one. Crowd gathers around stage and there are people dancing everywhere. Food and homemade wine is sold the at the back but we saw people bringing in their own supply of favorite tipple.

It is not uncommon to see local celebrities at the even. We witnessed Usha Uthup sing a couple of songs. By midnight, party is at peak and almost everyone is dancing on floors. If you are visiting Kolkata during Christmas do visit Bow Barracks to be part of fun filled experience.