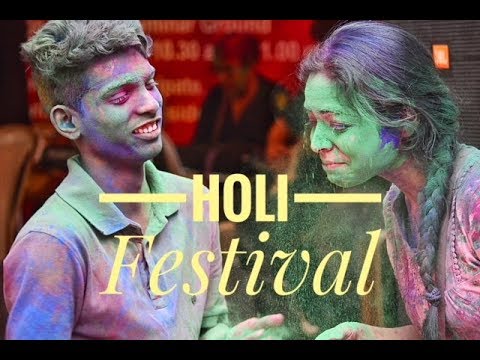 Holi is most colorful festival celebrated all over India and countries with large Indian diaspora population namely in Nepal, Surinam, Fiji, UK, USA, West Indies and Mauritius.  Festivities start on full moon evening of Phalgun month of Indian lunar calendar which typically falls in the month of March.

Holi,festival of colors, is celebrated in different parts of India.  It is also known as Phagwah, Jot Jatra, Basant Utsav and Sigmo.

In most of India, Holi is two day festival.  On full moon day of Phalgun people gather firewood, discarded old furniture, dried sugar cane and other objects to create a bonfire.  A pot of harvest seeds mostly barley is kept under the fire and people take back roasted seeds home as a mark of goodwill.  Bonfire known as Holika marks the end of the harvest season although there are few mythical stories surrounding it.

Most common story is from chapter 7th of  Bhagwat Purana (8th to 10th CE).  According to the story demon King Hiranyakashap wanted his subjects to worship him but his own son Prahlada was devoted to God Vishnu.  King’s evil sister Holika tricked Prahlad to sit on pyre with her.  She was wearing a clock which renders her immune to fire but boy was to burn and die in the fire.  However, magical clock miraculously enveloped Prahlad as a result Holika burned to death.

Holi pyres (bonfire) are created in public places, temples, community parks and large street crossing even today.  People living nearby gather around fire to dance and sign songs retelling tales of victory of good over evil.  Traditional sweets such as Gujiya, Malpua, Mathri and Thandai is offered.  In north India, it is acceptable to mix bhang (marijuana) in small quantity in Thandai, a milkshake made with dry fruits and spices.

The next morning is when people come out and play with color and water.  This day is known as Rangwali Holi or Dhulandi.  People gather in open spaces, community halls or streets armed with water guns, color powder known as Abir and Gulal.  They would throw color powder and water on their friends and relatives.  Children team up and do the same on passerby including total strangers which is totally acceptable.

Nature’s seasonal fruits and flowers are traditional inspiration for colors used in Holi.  Red and Orange are obtained by Tesu, Flame of the forest, dried hibiscus, pomegranate seeds and beetroot.  Green color is derived from Henna and Gulmohar leaves. Blue or Indigo comes from Indigo plants, blue hibiscus and Jacaranda flowers.  Gooseberry, tea leaves and clay are the sources of various shades of dark brown and black.  In recent times, specially in cities edible ink used in coloring foodstuff is also used.

In big cities, there are paid events where colorful fun is mixed with rain dance, live DJ and celebrities appearance and performances making a breakaway from traditional Holi festivities.

Holi In Different Parts Of India

In most of the states of India including Gujrat, Punjab, Haryana, Uttarakhand, Bihar, West Bengal, Orrisa, Assam, Karnataka, Telangana, and Tamil Nadu Holi is celebrated for two days.  However festivities may continue for over a week in some states.

In Uttar Pradesh near Mathura and its surrounding areas celebration begins a fortnight before the Holi.  In Vrindavan, a village near Mathura, people celebrate Holi with flowers.  Cultural events are organized where local and international artists enacts Rasleela through classical dance and music whereas in Barsana village barely few kilometers away celebrates Lathmar Holi.  In this, brave young men come to play Holi with women in the village who playfully beat them with sticks and whips.  The is some bloodshed but real intention is show of love, playfulness and fun.

Manipuri folks play Holi for six days which coincides with spring festival of Yaosang.  In Goa and rural Maharashtra it is known is Shigmo or Shigma.  The celebration lasts for a month and mainly held in temples and community spaces on designated days.

How Tourists Can Celebrate Holi In India?

Holi is a festival which transcends all castes, religion, class barriers in India.  It is easy to join any group playing Holi on streets or community spaces.  People generally invite curious foreigners to their festivities.  They are offered traditional food, thandai (milk based spicy drink made with dry fruits, black pepper and spices).  Playful simmering of colors on face and hairs is expected so are selfies with colorful faces without recognition.

Danger and Annoyances For Tourists During Holi

Although it is generally safe to take part in native festivities of Holi even if you are a foreigner visiting country as a tourist but few things should be kept in mind.  Do not wear new clothes as colors may not wash away.  Thandai offered by the host can be spiked with Bhang (a derivative of marijuana) so it is better to ask before consuming it.  water and color powder may damage camera and mobile phone.  It is essential to keep them in waterproof covers if you plan to take pictures.  Young men consuming spiked Bhang with libel doses of alcohol may try to touch women in inappropriate ways so a single woman should keep their guards or come in group if possible.  Holi is large public places and community halls are safe and streets have extra police presence.

In nutshell, Holi is unique festival which is full of fun, festivities and colorful which should be experienced if you are traveling to India in the month of March.