The park has beautiful trails passing through different forests and ecosystems and suddenly ending into flat plateau that offers spectacular views from cliff that drops over 1000 meters. The total nine kilometres trail is eerily beautiful and offers two view points from cliffs known as World’s End and Mini World’s End. There is a breath taking waterfall known as Baker’s Fall forming part of the popular hiking trail.

How To Reach World’s End Aka Horton Plains

For most travellers the journey start’s from planter’s town of Nuwara Eliya which is 34 kilometres away from Horton Plains.  The nearest railway station is Nanu Oya however it is possible to start journey from Pattipola which is highest railway station in Sri Lanka.  We paid LKR 4000 (Euro 20) for a comfortable 7 seater van for a round trip to Horton Plains from Nuwara Eliya.  This included car with driver, parking at the national park and return.  The freedom of having own car allowed us to stop along the way to take pictures of beautiful landscape.  A random tuktuk driver offered to do the same for LKR 2500 (USD 14, Euro 12) but we decided against it.  We did not like the prospect of steep ride in open tuktuk that exposes us to elements when outside temperature is 10 degree centigrade or less. 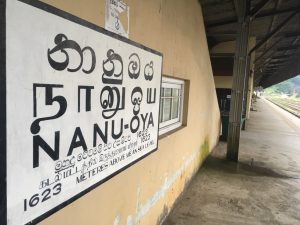 Pattipola which is only 10 kilometres away may be a cheaper option in terms of transport.  However, most tourists stay in Nuwaya Eliya to explore the charming colonial town and its surrounding tea estates.

When To Go For World’s End Hike?

Horton Plain is mostly wet Montane forest.  The temperature is around 10 to 15 degree celsius however during dry season it can suddenly plummet to 5 degree or less. It is better to hike in dry months of November to February.  It is advisable to check local forecast before making any plan.  The rain will not only make hike very difficult due to slippery trail, there will be less chance to see the view from the top of the cliff due to heavy clouds.

The park opens at 6 am and there is generally lots of people waiting to buy tickets.  We waited for 15 minutes.  It takes one hour to reach there so it better to start at 5 am from hotel.  Most hotels will give you packed lunch and water for the hike.

Entry Tickets And Other Useful Tips

The entry ticket for foreigner is LKR 2640 + taxes and fee.  We paid a total of LKR 8050 which included price for two adult foreigners, one van and driver.  That works out to USD 45 or Euro 40.  It is possible to get discount for a group of 7 or more.   So those want to save money may hook up with fellow travellers in hostel to get 20% group discount.

The weather is unpredictable in Horton Plains National Park. It can turn from cold 10 degree wet to hot sunny 30 in matter of few minutes.  Dress in layers preferably in dry hiking clothes with a waterproof warm jacket.

A suitable hiking shoe with good grip is preferred but normal sneaker would be all right for this easy to moderately difficult hike.  No plastic is allowed except water bottles inside the Horton Plains National Park.  Drones are not allowed but cameras including movie cameras are freely allowed without any extra charge.  Park officers check bags thoroughly for plastic and drones at the entry point. 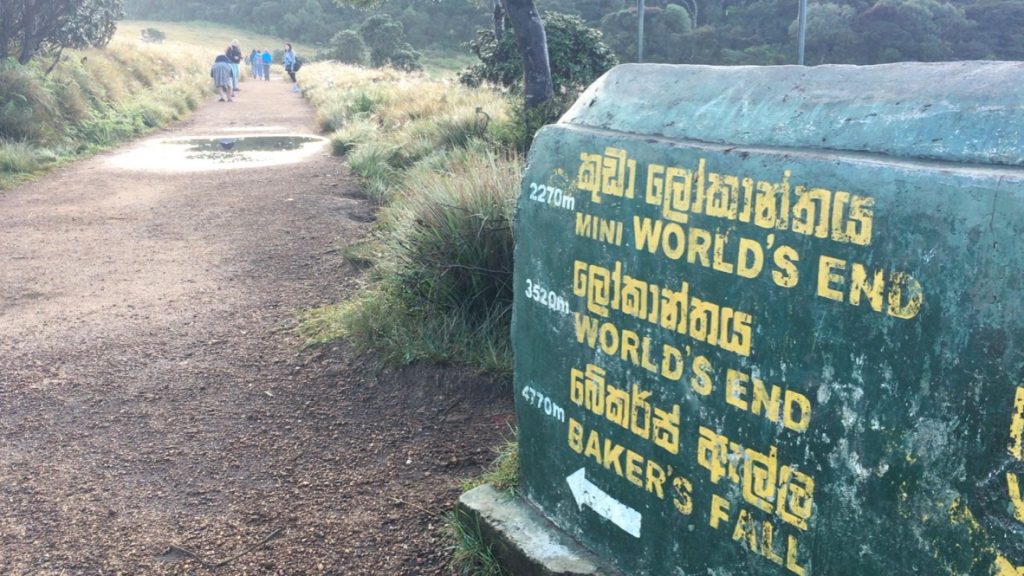 We started from hotel at 5:30, after reaching gate entry point, buying tickets (15 minutes wait) and getting bags checked by the time we reach trail’s starting point it was already 7:10 am.  We took four hours to finish the hike at leisurely pace with several breaks for picture taking, toilet break and breakfast at World’s End point.  It is doable in 2.5 hours for those in hurry or very fit.  People with low fitness level or those travelling with small children may take longer time.

During our hike we saw rolling hills, water channels leading to nearby streams and trail of moderate difficulty. 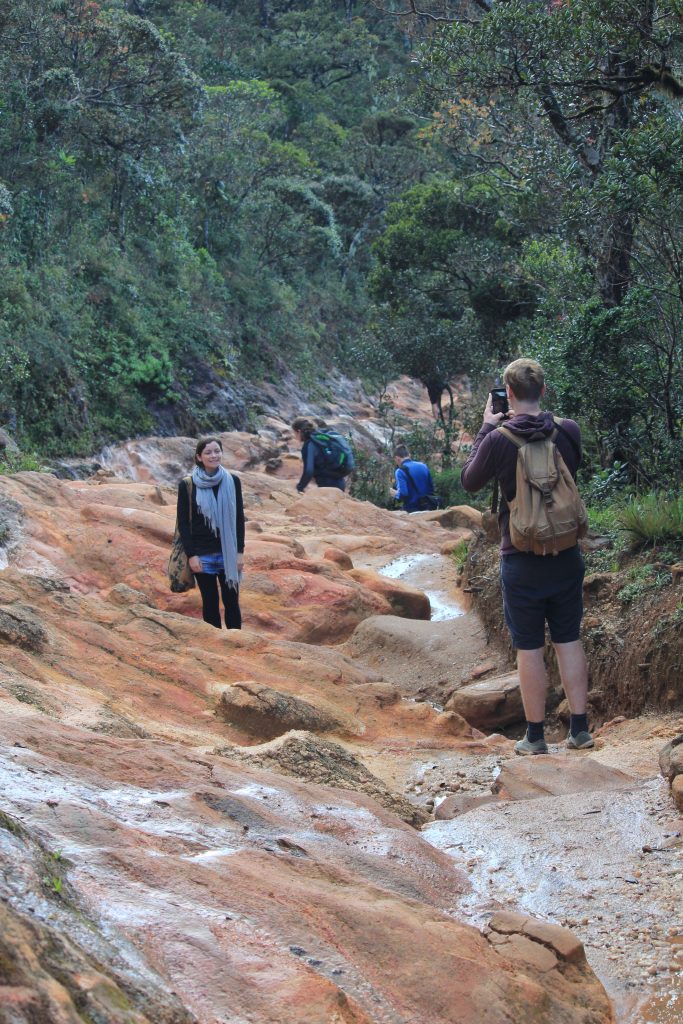 The trail was slippery at times.  There are wild animals and birds throughout the trail.  The Horton Plains National Park is full of Sambar deer.  They are not afraid of people so it was possible to take pictures up close.  In addition we saw monkeys and mongoose.  Some hikers reported seeing snakes too. 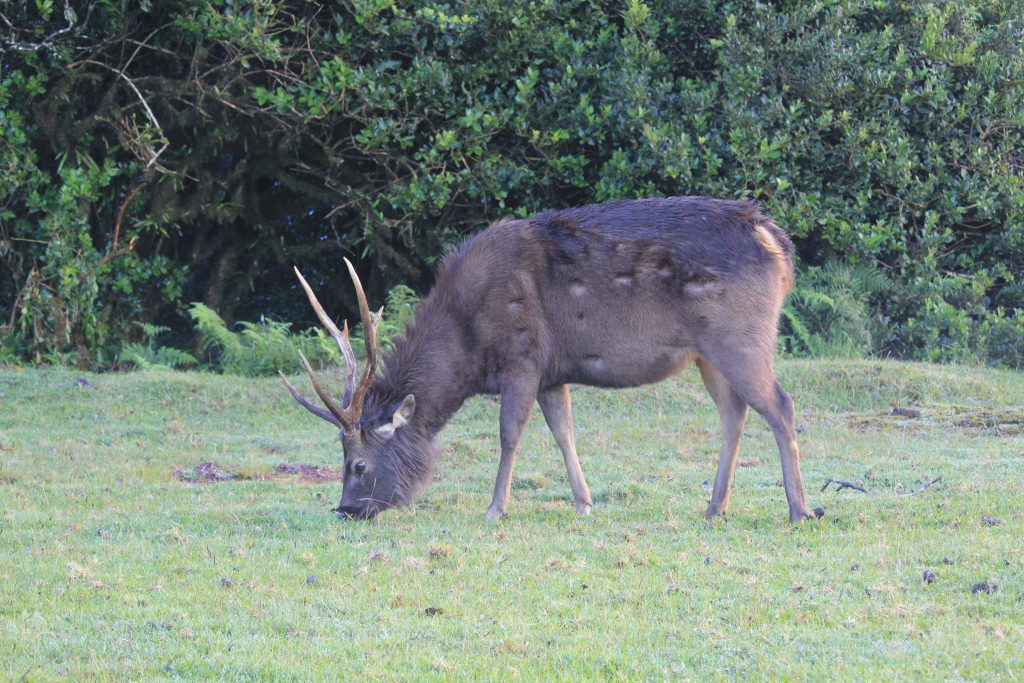 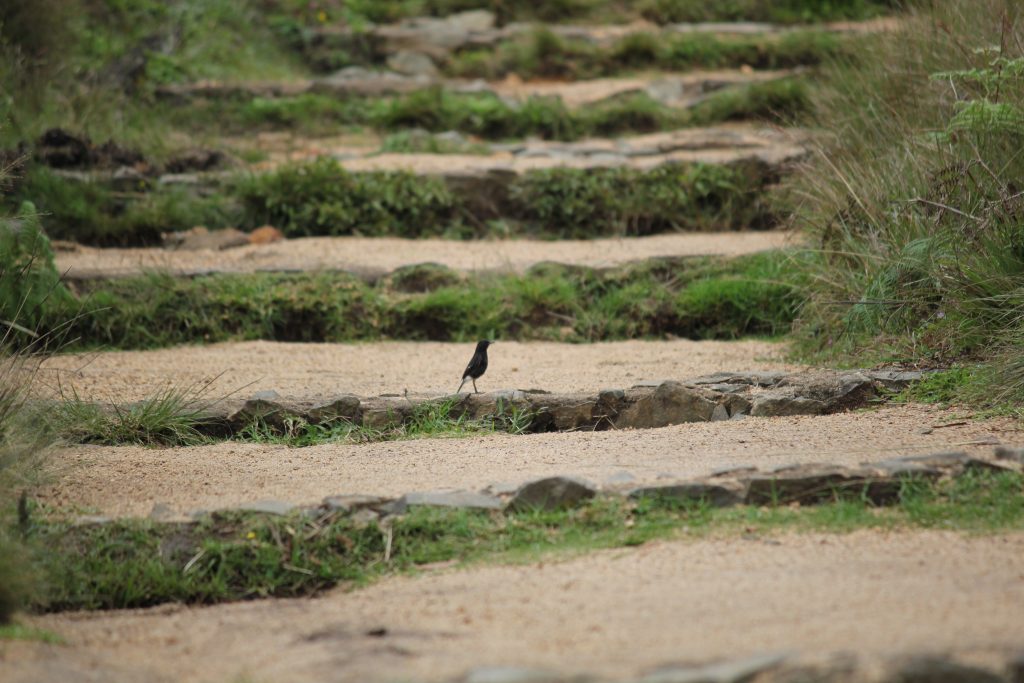 We also saw various species of birds the one we can identify are the Yellow-eared Bulbul, Wood Pigeon and Dull-blue Flycatcher.   The park may have few elusive leopards but encounter with such shy creature in the company of hordes of tourist is next to impossible.  Our guest house manager told us that best chances of leopard sighting is in the month of August.

The park has information boards about flora through out the trail.  It is easy to identify those plants if you have any interest.

Our Experience Of Counter Clock-Wise Hike Of Horton Plains

We started our walk at 7:10 from entry point.  There is a board that tells about the order of view points and their elevation.  The walk to mini world ’s end was easy with a gradual elevation which unexpectedly opened into a cliff top.  It took about 35 minutes and view was clear from the cliff.

After staying at cliff we proceed towards World’s End view point.  The directions were clearly marked.

The trail leading to World’s End was a bit wet and slippery.  There were some points were you could get your shoes wet.  It took 30 minutes to reach.  There were lots of people already taking pictures.  We took sometime to enjoy the beauty of terrifying 1000 meter drops while having simple breakfast that guesthouse packed for us.

At 10 am we reached Baker’s fall although we could hear the sound of mighty waterfall at least 15 minutes before the summit.  The way to waterfall was very slippery.  Thankfully there were steps with hand rail for support and protection.

After retracing our steps we took left turn to the end of the hike.  There were steep steps made of stone on our way back.  Gradually those gave way to rolling hills and gentle ascend. We saw another stone bridge and small waterfall on the way. 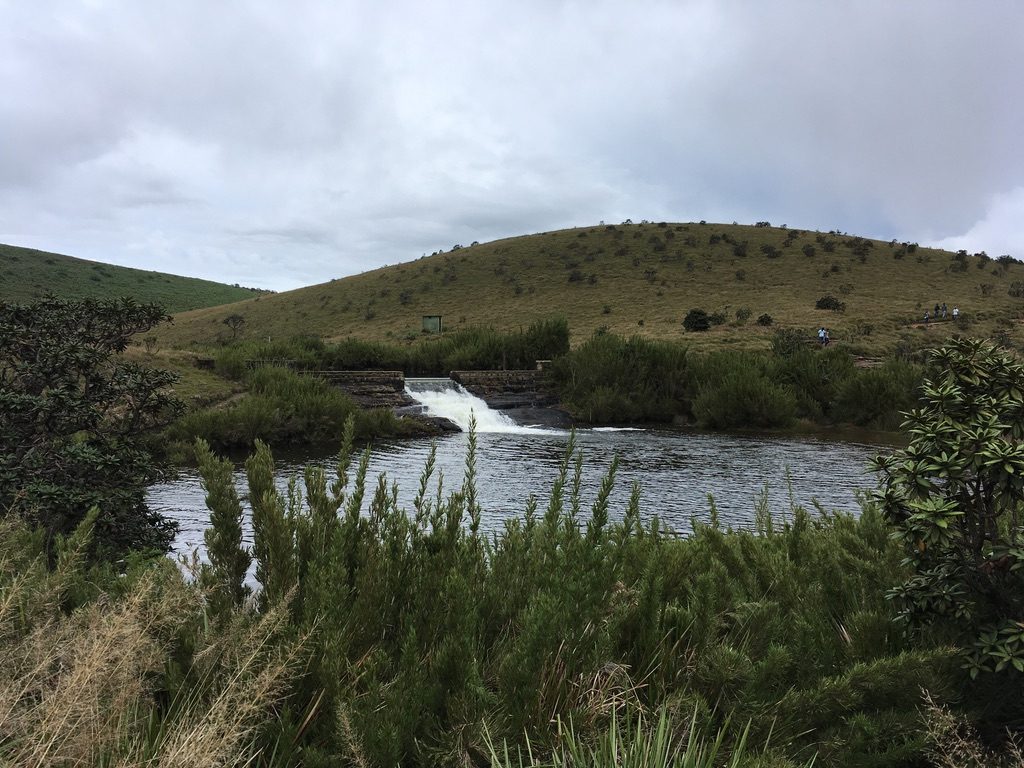 There were lots of local taking selfie.  On way back we concentrated on watching birds and small mammals.  We managed to see few monkeys, Sambar deer and birds. By 11:30 we reached a small coffee shop at the end of the trail.

Ride Back To Town 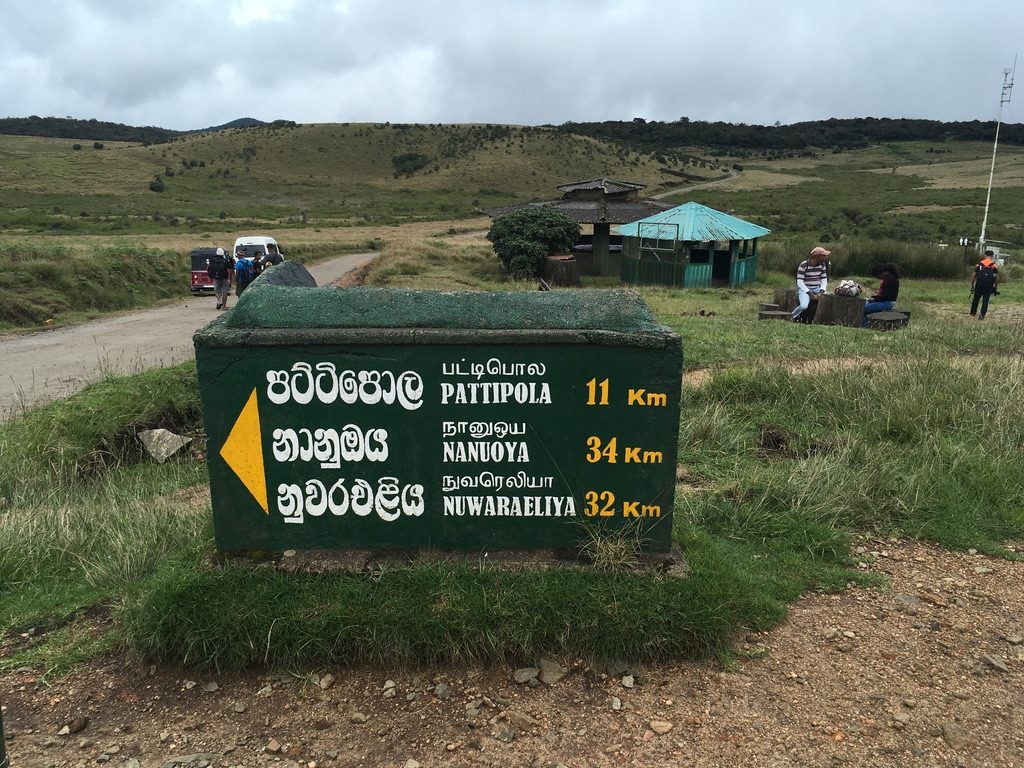 On our way back to town we rode through several hairpin bands which our driver skilfully negotiated. We stopped to watch monkeys.

There was a local dairy farm on the way back to Nuwara Eliya.  It was nice to watch cows grazing over gently sloping hills.  Took some pictures.  By 1pm we were back in town asked driver to drop us at the centre of the town for Sri Lankan lunch at Themparadu cafe.