While Holi festival starts in the evening of full moon in Phalgun (March) with a bonfire, school children start celebrating holi right after school break.  It is a tradition for most students in school to play Holi just at the end of the school day before Holi festival.  The same tradition is carried on in offices, wholesale markets and other public gatherings.  People usually wear old clothes and carry a packet of Gulal, dry color powder and greet others by simmering some on the face of people who they know usually coworkers or classmates.  Some offices close early and organize a Holi party.

This video is taken in by lanes of Kolkata where school girls engaged in playful exchange of color just after the school, heralding arrival of colorful Holi.  We are posting future dates for Holi festival so that our readers can take part.  More about Holi, its celebration in India and abroad, customs,anecdotes and youtube video guide is posted here.

Holi celebration dates depends on Indian lunar calendar known as Panchang which is a religious almanac.  According to this, tithi or dates of Holi are as follows:

With exception of the year 2029, Holi will be celebrated in the month of March in various parts of india.  However, readers should check other authentic websites such as list of banking holidays by Reserve Bank of India, Panchangam and government of india’s official website 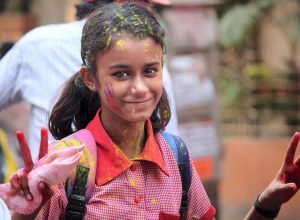