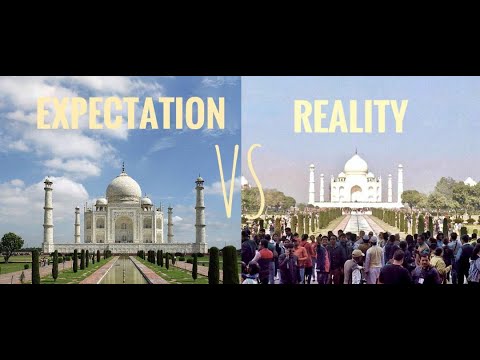 I am not sure what expectation people have in mind while visiting Taj Mahal?  Pictures on internet evokes feeling of romance where you can hold hand with your loved one and enjoy the beauty of this architectural wonder of the world.  Mythical spell was broken as soon I started heading towards Taj Mahal armed with guidebook and camera, clutching hand of my lover.  On way to Taj Mahal, rude awakening came in many forms including touts who told about wait would be hours, guides who would insist on offering services and young men asking to take selfie with them.

Eastern gate, typical entrance point for foreigners was closed.  Our Uber driver refused to drop us near Taj Mahal so we walked a while through narrow by-lanes, thanks to google map for leading us to most obscure route.  This was Christmas and thousand of denizens of Agra had similar idea as myself about visiting Taj.  The queue for buying ticket was literally a mile long.  Fortunately a policeman told us that there is separate window for foreigners and we can ignore the queue and head right at the front of the ticket window.

So we walked past reading the resentment on thousand faces who were still waiting in queue to get their tickets. There was a sliver of truth in policeman’s word. Line was relatively small for foreigners.

After paying Rs 1300 (US$20) we were lead towards security gates.  They told that GoPro mount is not allowed (no reason given) so we had to argue and persuade that it is not a selfie stick and needed for stable pictures. Video camera is not allowed so avoided making reference to video taking ability of GoPro. Thankfully we are given benefit of doubt and allowed to enter.

Later I checked official website and here is what I found.

Although, Taj Mahal is open to visitors everyday (except Friday) from morning to Sunset year round, the best months for visiting are December to March. In summer, the heat is totally unbearable.

Early morning or late evening followed by night viewing would be ideal to appreciate true beauty of it. Government also organizes special full moon tour when a tourist can see its beauty in full moon. Tickets can be purchased 24 hours before at Archeological Survey of India, 22 Mail Road, Agra. Ph:0562-2227263 Email: asiagra@sancharnet.in

Special tour of Taj is offered 5 nights in a month, on full moon night and two nights before and after full Moon. The viewing duration is limited to half hour for a batch of 50 people. Tickets for 8 such batches are sold. Entry is available only through Eastern gate between  20:30 hrs. to 00.30 hrs.

Although, my dreams of having quite and peace time alone with Taj Mahal died along the road to ticket window but Taj was imposing and mesmerizing at the first sight.  The enormous size and grandeur of it is the first thing I noticed.

The place was swarming with people and I simply hoped to take few pictures of Taj with less people, if such thing was possible at all.  There were few stone platforms for people to sit and take pictures and there was a queue of people waiting for that epic selfie.  30 seconds, I guess, was time I had to take selfie and few shots on my trusty old Canon.

We managed to hang around and make the most of our visit.   The imposing monument changes color as sunlight bathes it at different time of the day.  I promised myself to visit again once more on a less crowded day and take time-lapse video.  The beauty of Taj can leave you speechless. So, here is what I learned from guide and personal visit.

The Myth & Facts Of Taj Mahal

Taj Mahal like every other old building is shrouded in folds of myths, folklores and unknown facts.  I would suggest that one read up some articles, if not books and hire a knowledgeable guide to comprehend true essence of this marvel.

Taj Mahal Is Not A Palace

Yeah, the word Mahal meaning a palace is deceptively used here.  In India, all palaces have word Mahal attached to it so I mistakenly believed that this one too a palace made by Shah Jahan the emperor for his beloved queen.  The story behind it is still very romantic and sad.

As commonly narrated lore, it is believed that King was distraught by the death of his beloved queen Mumtaz who died in childbirth.  He mourned her death for couple of years distancing himself of court duties. Later, he wowed to make most beautiful monument where his equally beautiful beloved queen would rest. What a romantic declaration of love!

Optical illusions and symmetry are in play as soon as you approach this architectural wonder.  The  Taj Mahal appears quite big from entrance gate which is farthest point.  As visitors approach towards the monument, it appears smaller in size.  This is quite opposite of what we experience in everyday life.

The minarets are leaning away from the main structure yet they appear to be in straight line.  The four minarets not only balance the symmetry of the design, they also are designed to lean away from main building so that in the event of any minaret falls it will not damage the main structure.

Pictorial depictions are forbidden in Islam so designers resorted to geometric designs and calligraphy to evoke its beauty.  Calligraphic Koran scriptures made from Black Jasper is inlaid on the main door of Taj Mahal.  Letters at the bottom look same in size when compared with letterings on the top of the door which is about 100 feet high.

The chief calligrapher, Amanat Khan, achieved this optical illusion by gradually increasing the font size with height of the door. His signature appears twice with dates suggesting that entire work was finished in a year.

The builders of Taj were a claver lot.  They choose white makrana marble, the best available in those time, for its exteriors.  As a result, Taj Mahal changes color depending on time of the day and intensity of sunlight reflected by this eternal beauty.  There are over twenty shaded of Taj reported by visitors ranging from milky white to glowing amber.

It might sound strange to say this of an inanimate building, but every time you see the Taj, it looks different.  The colour of its white marble changes throughout the day, from the waxy yellow at dawn through to the pastel blue-gray of a full moon.

Symmetry In Design Of Taj

As paintings are not allowed in Islam religion so builders relied heavily on floral motifs and geometric proportionate designs.  Everything follows a geometric pattern and semi precious stones were inlaid in flower motifs. Although one minaret was enough for a mosque but four ware erected to preserve the symmetry and harmony of the design. Except for one. The cenotaph of Mumtaz Mahal is placed in geometric proportion of the building while Shah-Jahan, the emperor’s cenotaph looks out of place.  This brings a question. Why it was not planned in the monument? Probably he was never meant to be buried here at all.

Taj Mahal as A Teardrop on the Cheek of Time

A Black Taj Mahal Was Planned

Shah Jahan wanted to build an identical monument in Black marble.  It was to be built on opposite side of Yamuna river facing Taj Mahal.  However, the construction never started because he was imprisoned by his own son.  Aurangzeb, child of Mumtaz Mahal refused to fund this costly indulgence and thought that money would be better spend in military expeditions and wars.

This myth is probably closed to reality as there is evidence of some foundation excavated in 2006 by archaeologists.

The Mystery Of English Garden In Taj

I noticed that the garden looks very British with its manicured lawns. My guide confirmed my suspicions.

The original gardens were divided in four parts aptly named Char Bagh. The original garden was divided in four parts by streams representing water, honey, wine and milk.  It was a Mughal style orchard with fruit bearing trees mostly mangoes and pomegranate. Wild animals like deers roaming free.  This, in the mind of original makers, represented Heaven, a place with abundant food, water and greenery.

Later, the British rulers in the mid 19th century reorganized the placement of trees to give it a British look while preserving the original plan.

Both Cenotaphs Are Empty

The beautiful, ornate cenotaph as empty. Islam forbids excessive decoration of graves so Emperor and queen are resting in simple grave built on garden level. The entry of general visitors is not allowed in that area.

Lot More Than Symbol Of Love

Although Taj Mahal represents one of the greatest symbol of love that a man offers to his wife. The Taj is a love story carved in stone and shows intensity of man’s love. As time passed, it was even claimed that Emperor remained faithful to his wife even after her death. However, contemporary travellers such as Manucci has discounted such claims involving three decades of celibacy.

I view Taj as symbol of love as well projected power to instill the feeling of awe in the minds of neighboring kings and visitors.

Seven Wonders Of The World

Although many believed Taj to be in the list of Seven Wonders Of The World but in reality it was not. In 2001 an initiative was started by the New7Wonders Foundation to create a new list of wonders based on public opinion polls. Taj was included in 21 finalists announced in 2006 and finally secured its place in New7Wonders Of The World.

Taj Mahal has been an enigma for generations to come.  As the time passed, each successive generation invented its own myth, folklore and rumors.  I can’t comment whether there is any element of truth in it or not however there is always some reason behind these stories. Visitors to Taj Mahal should separate myths from realities.

Taj has survived for 600 years.  It has witnessed change of reign, revolutions and stream of important visitors.  Elaborate camouflage were deployed during world wars and recent conflict with Pakistan to lure attacks away from the structure.  However the most potent threat it faces now is environment and man made pollution.

Vehicular pollution has emerged as potent threat to color of marble which is turning to dull yellow. Use of gasoline based automobiles are restricted near the perimeter of Taj Mahal.  The structure is polished periodically by application of specially prepared Multan mud pack.

Government has restricted entry to 40000 visitors per day and 400 visitors for full moon night viewing.

Wood in well foundation are in the danger of drying out and crumbling because of dwindling water supply of Yamuna river which keeps wood in the foundation moist enough to hold the integrity of the foundation.

We certainly enjoyed full day walking, exploring the beauty, history and myths of Taj Mahal while keeping in mind the reality of challenges it faces from pollution.  In the evening we took the train to Bharatpur to watch equally endangered migratory birds.

All About Getting Indian eVisa Online

How Nepal Is Turning Tourists Into Illegal Aliens